In this post I will analyse the available CNI plugins for Amazon Elastic Kubernetes Service.

Cloud providers like AWS, Google are in the market with their managed Kubernetes offering, which is one of the easiest ways to getting started with the Kubernetes journey. The cloud provider manage most of the components, but you still get a chance to choose your own CNI. Different providers offers different CNI plugins. AWS give you two option Calico or VPC CNI.

To add or update the add-on on your cluster, see Managing the Amazon VPC CNI add-on. If you want to update the version in the existing cluster, run the below command.

To use this CNI you need an Amazon EC2 Nitro instances for node groups in the cluster.

We can yous any other standerd CNI plugin, but the other suppertid CNI in EKS is Caliso. The huge advantage of Calico is the ability to create Network policies. Network policies are similar to AWS security groups in that you can create network ingress and egress rules. Instead of assigning instances to a security group, you assign network policies to pods using pod selectors and labels.

If you go with your own CNI, AWS will not be supporting any issues related to networking, as they don’t manage it. They are right at their end but definitely something you should watch out for. 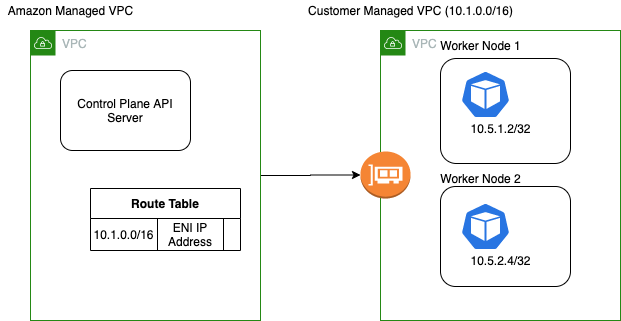 Some situation It can be a problem fi your pods can’t communicate with te api server. This means you cannot use admission webhooks, operators or Service Mesh. On the other hand it can be a security feature too.